News/Media - Origins of the Order of Malta: The Hospital of St John in Jerusalem

Origins of the Order of Malta: The Hospital of St John in Jerusalem

When considering the Order of Malta’s origins, one undoubtedly begins the story with The Order of the Hospital of St. John in Jerusalem. 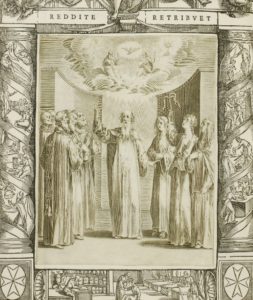 It is known the Order of St. John emerged from a hospital in Jerusalem that had been taking care of pilgrims at the time Jerusalem was taken during the First Crusade (1099 A.D.).

What is unknown is when the hospital was founded.

The hospital was operated by Benedictine monks from the abbey neighboring the hospital. They formed the initial members of the Order when the hospital became independent of its monastic parents early in the 12th century.

While his past is a mystery, Gerard, their superior, and the eventual Master of the Order must have been renowned for his unconventional devotion to the service of the ‘holy poor’ as the Order grew quickly as did its supporters.

A century later, the veneration of poverty reached a new expression through the teachings and example set by St Francis of Assisi.

Gerard and his Hospitallers’ humility, respect and love for the poor, in many ways foreshadowed the Franciscans. Gifts sent to the hospital were made out to ‘the poor of Christ’.

The master of the hospital was seen as both ‘serf’ and ‘guardian’ of the poor. 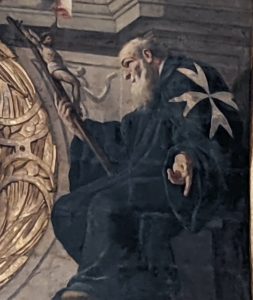 Today the Grandmaster of the Order still holds the title of Custos Pauperum.

Brothers were seen as ‘serfs’ of the poor and as such were obliged by their rule to wear only humble clothing as they considered it improper to be perceived as ‘above’ those they served.

Hospitallers demonstrated their concern for the poor primarily by caring for them when sick and burying them if they died.

Patients were admitted to the hospital regardless of their religious affiliation.

Hospitals of the Medieval Period

At the time of the hospital’s operation, organised care of the sick throughout Western Europe was sporadic at best.

After the fall of the Roman empire, there were established hospitals in the West, but they were usually temporary.

While private hospitals such as monastic infirmaries existed in the West, in the Byzantine and Islamic world of the East public hospitals were far more common.

Public hospitals appeared far later in the West. By the 12th century the movement of caring for the sick had begun and by the 14th century, England had 600 hospitals, most containing less than 30 beds, however the St. Leonards at York cared for up to 224 sick and poor people.

Two types of Medieval hospitals were commonly found, the first was dedicated to serving people suffering from leprosy. A prominent hospital for lepers was operated in Jerusalem by the brothers of St. Lazarus.

Leper hospitals dealt with diseases thought to be highly infectious and incurable and they tended to be isolated from the rest of the sick, as such the Hospital of St. John did not admit lepers.

Leper hospitals were often self-enclosed religious communities run by a master, typically a priest, who was assisted by brothers and sisters. The patients in this community were also regarded as brothers and sisters and were granted a say in the management of their affairs.

The other type of hospital dealt with curable diseases where simple surgeries and other basic medical treatments were provided. The Hospital of St. John in Jerusalem falls under this category.

Operations at the Hospital to treat ruptures, piles, cataracts, and the removal of nasal polyps were commonplace. They also had a cursory knowledge of antiseptics, mainly vinegar, which was likely introduced by the crusaders.

Hospital staff understood that given time, patients that were properly cared for, fed, and kept warm and peaceful, would typically recover on their own.

The hallmark of Hospitaller nursing was the belief that every poor man and woman was Christ and therefore should have access to the highest quality care available.

Hospitaller Influence in the West

This approach to healthcare was enormously influential in the development of later hospitals and it’s unsurprising the hospital was famous in its day. Amazingly, it could accommodate up to 2000 men, women, and children, a truly astonishing feat for the time. 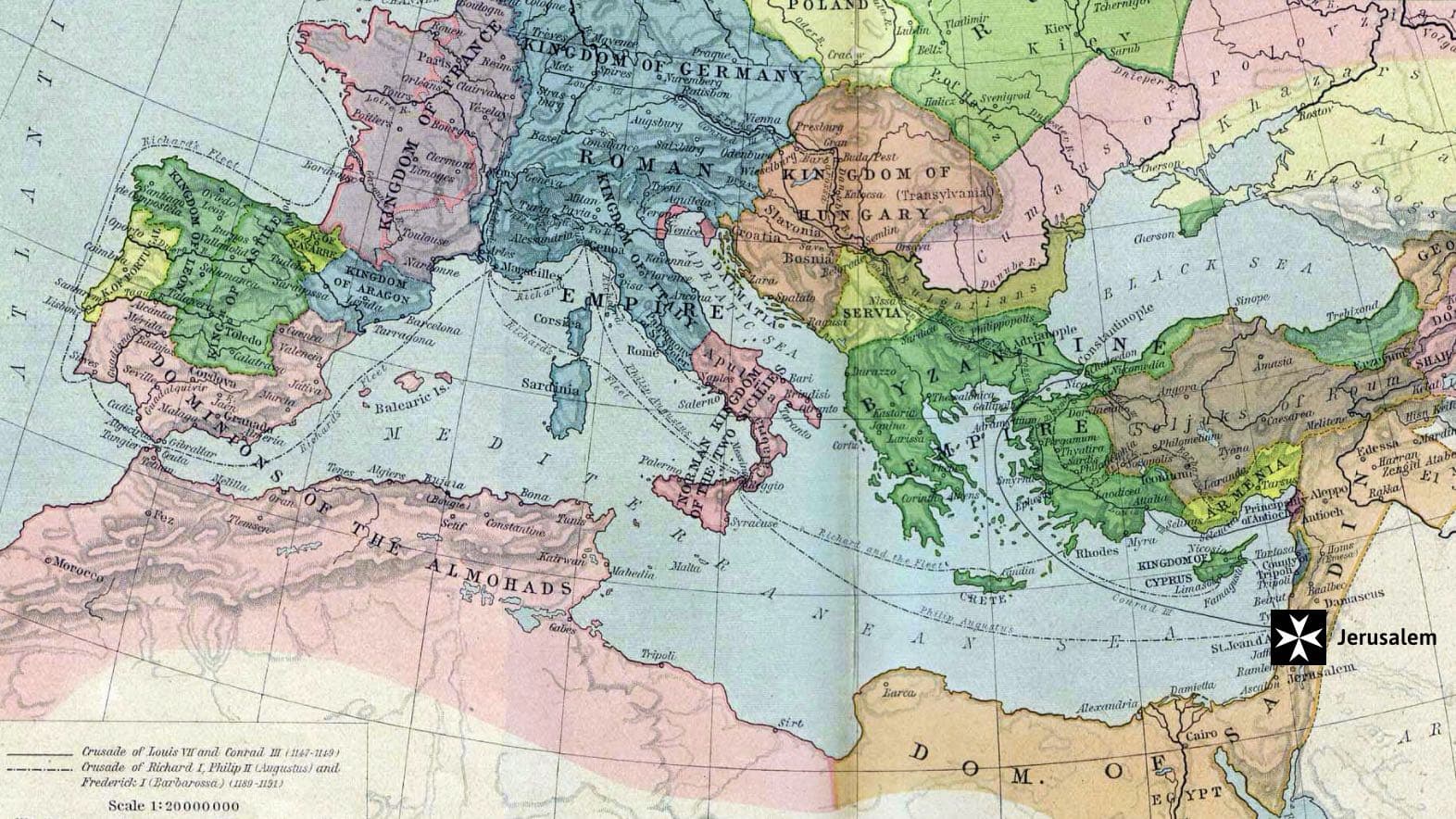 When the hospital reached full capacity, the brothers were known to give up their dormitories to the sick and sleep on the floor. If the sick were unable to admit themselves, Hospitaller servants were sent to fetch them and bring them to the hospital.

Life in the Hospital

Upon reception at the hospital, the Christian patients would make confessions and receive communion, they were also encouraged to receive the sacrament every Sunday.

Patients were divided into eleven wards that were blessed with holy water daily. There were separate wards for men and women, the female wards had female domestic servants and astonishingly one full ward was even devoted to obstetrics.

New-born babies were immediately bathed, and wet nurses were provided for mothers who could not feed their children due to poverty or illness.

Each ward was supervised by a brother who was assisted by twelve servants who would take care of the patients and see to changing their linens.

Two servants were on duty in neighbouring wards every night. Their duty was to light the lamps that would burn from dusk to dawn and ensure the patients were comfortable. When a patient passed, they would carry the bodies of the deceased into the conventional church and summon a priest to pray over the body.

An exceptional practice at the hospital was every evening, one servant would continuously call out ‘Lords, wine on behalf of God’, while walking through the ward with a staff in his left hand and a beaker of wine in his right. Another servant would follow him with a candle and glazed jug of cold water calling out ‘water on behalf of God’, while a third servant followed with hot water, calling out ‘ Hot water in the name of God’.

After evening prayers, an inspection of each ward took place by a brother and procession of candles.

At a time when only the privileged had separate beds, those admitted to the hospital were provided their own bed and the obstetrical ward even provided cots for newborns so they would not disturb their resting mothers.

These beds were no mangers either, they had feather mattresses and covers that were changed every fortnight.

Patients were provided sandals and cloaks when using communal toilets and they even employed barbers to wash patients’ feet with hot water twice a week and remove hard flesh with a pumice stone. The patient’s feet were then gently dried with soft towels.

If feeding 2000 patients a day wasn’t astonishing enough, they also managed to treat the patients to a lavish diet consisting of white bread together with fresh meat three times a week as well as a wide range of fresh fruits and vegetables. Remarkable, given only the privileged enjoyed diets of fresh meat and white bread.

These services were provided by two kitchens at the hospital, a shared one for men and women, and another specialised for patients with digestive issues.

Hospitallers did not like entrusting the care of patients to people outside the Order so they employed four physicians and four surgeons. The wards were distributed among them and each physician had sole charge of their patients' care.

Each morning and evening a physician, along with two servants, would inspect the patient’s urine and check their pulses.

Surgeons were often required to care for Jerusalem’s’ battle wounded out of mobile tent hospitals when on expeditions. The wounded who could not be treated on-site were sent on the backs of animals to Jerusalem or a hospital nearest the battlefield.

Brothers at arms, even the noblest of them would be known to give up their horses to escort the wounded to the nearest hospitals and return on foot to demonstrate their possessions belonged to the sick or wounded. 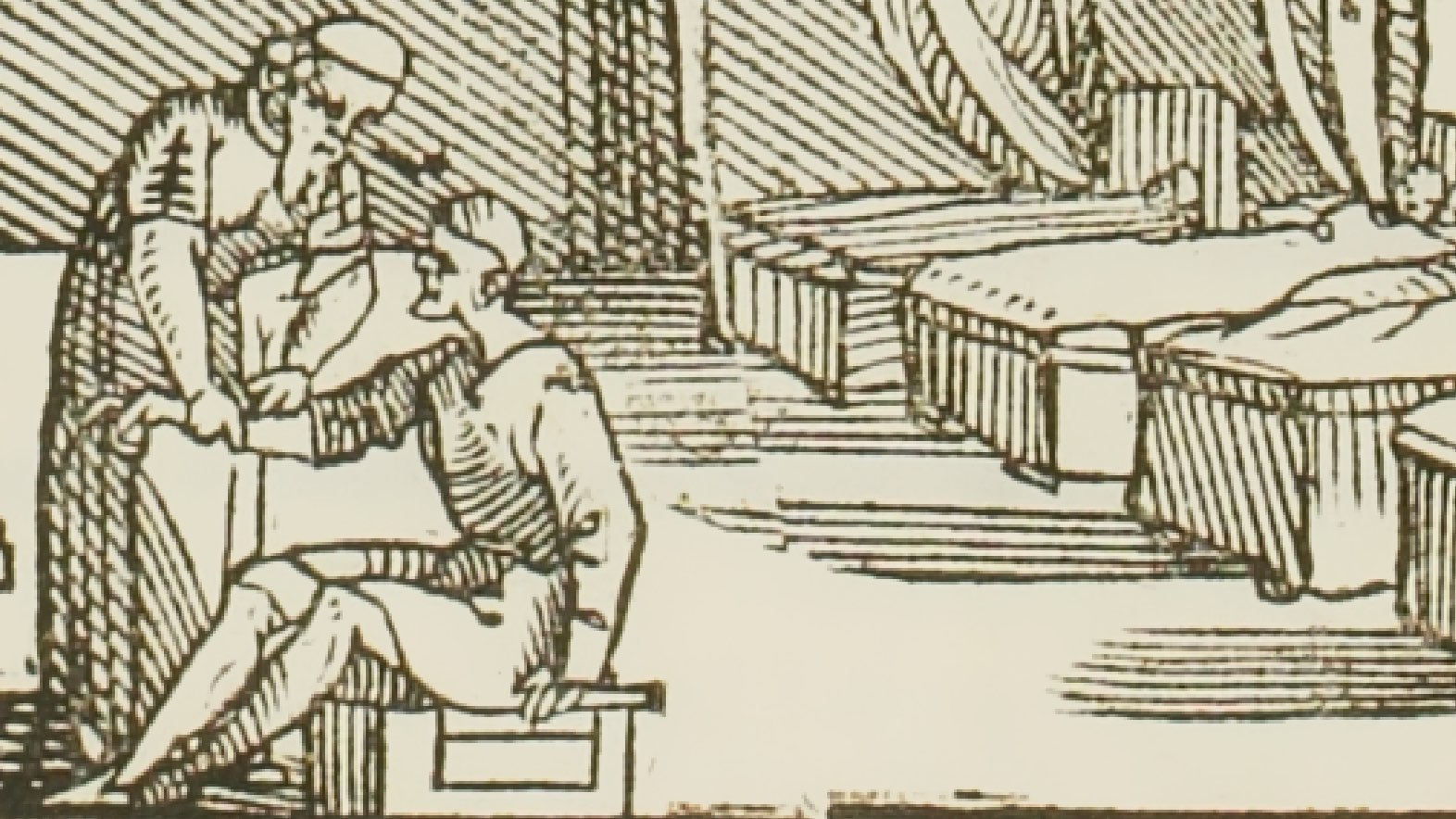 Outside of the hospital, the Order provided baskets of clothes and other forms of relief to women in the city who could not afford the essentials.

If a mother could not care for her child due to illness, the Master would entrust custody of a child to another and if a child was abandoned, the hospital would take them in, raise them and educate the child.

These children were known as ‘the children on St. John’. They were taught skills so that once grown, they could choose to either serve St. John, or venture out into the world on their own.

Wet nurses were obliged to frequently visit the hospital so that the children could be inspected. They received remuneration, but were held to high standards and if a visiting sister felt they could not provide adequate care, the child was given to a new wet nurse.

The logistics and expenses involved in running such an establishment were near unimaginable for most living at that time, a time when most had never had a separate bed or experienced such personal spiritual supervision.

The Hospital of St. John, was a true marvel of its time, and even today it’s comprehensive care model would be a challenge for even the world’s best hospitals to achieve.

It’s no surprise that from this fertile soil a religious Order would spring that would have a substantial impact on Christendom for centuries.

We’ll explore the official founding of the Order of Malta out of this Hospital of St. John in the next blog.

Follow us on social media and sign-up for our newsletter (see below) for news on future editions of this series.