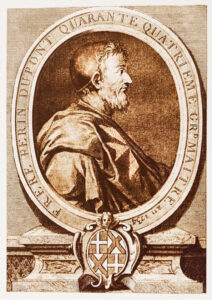 He joined the Order of Malta (still referred to then as the Order of St. John) probably before 1490. By 1495, he had already been made Procurator of the Langue of Italy. Some years later, in 1522, he was installed by Grand Master Phillipe Villiers de l’Isle Adam as the Order’s governor of the island of Lango (present-day Kos). This was just before the Order’s nearby capital, Rhodes, fell to the Ottomans.

Though the island of Lango (Kos) was spared attacks during the siege on Rhodes, when the Order left Rhodes, they abandoned all other Greek islands under their occupation as well.

Following the loss of Rhodes in 1523, Del Ponte accompanied Grand Master L’Isle Adam during subsequent sojourns in Rome, Messina, and elsewhere. In 1524, Del Ponte was appointed Seneschal of the Grand Master and conferred the dignity of Grand Cross for over 30 years of loyal service to the Order.

In the years that followed, Del Ponte spent most of his time in Piedmont looking after the Order’s interests in his native region. Meanwhile, the Order established its new headquarters on the island of Malta.

He focused his efforts on strengthening the Order’s fleet and developing Malta’s infrastructure.

Grand Master L’Isle Adam passed away in 1534. At the same time that Del Ponte was informed of L’Isle Adam’s death, he was told that he had been unanimously elected to take over the role of Grand Master. Now 72 years old, Del Ponte was reluctant to accept, but found himself compelled by reports of Ottoman corsair (admiral) Hayreddin Barbarossa’s maneuvers in Tripoli.

As such, Del Ponte’s first act as Grand Master was to send assistance to Tripoli, which had been bequeathed to the Order by Holy Roman Emperor Charles V. Over the next year, he focused his efforts on strengthening the Order’s fleet and developing Malta’s infrastructure.

Tensions with England under King Henry VIII and scandal brought on by a Spanish knight threatened with excommunication rocked the already precarious health of Del Ponte.

By October 1535, Del Ponte’s illness was so acute that he was confined to his bed. He died the next month on November 18th. His remains are buried in the crypt of St. John’s Co-Cathedral in Valletta, Malta.