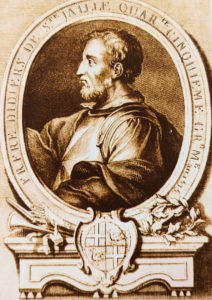 Having distinguished himself years earlier at the Siege of Rhodes in 1522, Grand Master Didier de Tholon Saint-Jalle was elected on November 22, 1535 on account of his demonstrated valor and experience. At the time of his election, Saint-Jalle was living in Toulouse.

After receiving word that he had been elected, it was necessary for Saint-Jalle to make arrangements to travel from France to the island of Malta. This travel prevented him from immediately carrying out his new responsibilities. And, it was made difficult by his precarious health.

By this point, eight months had passed since the election of Saint-Jalle and he had still not arrived in Malta. He fell ill while in the French coastal town of Montpellier and died there on September 26, 1536.