The Flags of the Grand Masters of the Order of Malta

The Order of Malta’s navy, which was primarily known as the Maltese Navy after 1530, was the first navy of a chivalric order. It was established during the Middle Ages, near the end of the 12th century.

It famously participated in the Battle of Lepanto (1571), in which a coalition of Catholic states arranged by Pope Pius V inflicted a major defeat on the fleet of the Ottoman Empire. Lepanto was also the last major battle in the Western world to be fought almost entirely between rowing vessels.

The Order's navy had a number of different types of ships over the centuries, but it consisted mainly of galleys in several sizes. There was also a royal barge that the Grand Master would use for ceremonial purposes.

The Order’s ships not only flew the traditional flags of the Order, but the personal flag of its current Grand Master.

For his personal flag, it was common for a Grand Master to quarter his familial coat of arms with the state flag of the Order. Not quite sure what that looks like? Check out the two examples below.

Grand Master Fra’ Philippe de Villiers de l’Isle-Adam was 44th Grand Master of the Order, serving from 1521 until 1534.
His personal standard shows his family’s coat of arms quartered with the white latin cross of the Order’s state flag.

There are two versions of Grand Master Pinto’s personal standard. The version pictured above was flown from his galley. It shows the coat of arms for the Pinto name (top right, bottom left) quartered with the state flag of the Order (top left, bottom right).

Another version of the personal standard of Grand Master Pinto has the Pinto family’s coat of arms quartered diagonally with the state flag of the Order. This standard was also used as a maritime flag. 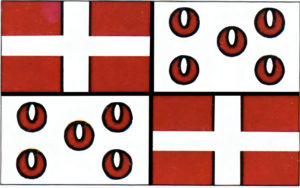 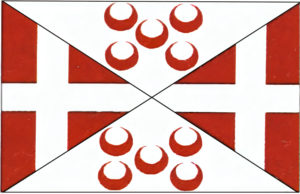 Another version of the personal standard of Pinto

What happened to the Order’s Navy?

The Order of Malta has not had a navy since the French invasion of Malta in 1798, at which point the French Navy took possession of all the Order’s ships.

Phoenix Location Receives the Mantle to Serve the Valley VETS!