The Polish Association was established in 1920 however there were Knights of Malta on Polish lands as far back as the 12th century.  When Stalin installed a communist government in Poland in 1945 the Order was not permitted to function and its only since 1990 that the Order has been active in Poland, though some of its members dated back to pre-WWII.  Since the Russian invasion of Ukraine on February 24th, the Polish Association has staffed a number of refugee registration points and transit stations (rail/bus) to help refugees.  For further information on the work of the Polish Association and Malteser International you can look at a PDF in English by clicking HERE.

The Polish Association typically brings less malades than the WA and instead brings a number of their volunteers who have contributed thousands of hours of work in gratitude for their service. The Polish Association is small with only 150 Knights and Dames, but they have thousands of volunteers. Joining the Polish group to Lourdes were Polish Knights from Great Britain and members of their Cadet Corps. This year they also brought 11 Ukrainian refugees including eight children.

Two of the refugees, Dimitri and his wife Olga, shared with me how important this Pilgrimage was to them, how their lives have been shattered, and how their children and four million other children from Ukraine have had to leave their country. They felt very blessed to be invited to Lourdes.

In the brief time that we were there I saw some peace and calmness come to the faces and eyes of the Ukrainian refugees. 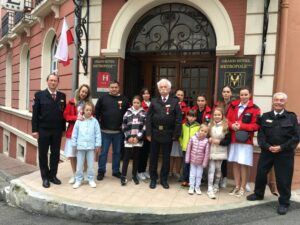 It was immensely powerful to see that change. Most of the refugees are women and children as most able-bodied men are required to defend their country from the Russian invasion. These other refugees told me sad stories of having to leave parents and husbands behind in Ukraine seeking safety for their children. Dimitri, who is a Cardiologist from L’viv, returned to Ukraine after the Pilgrimage.  Below is a photo of some of our Polish Association members Dr. Marcin Swierad, Dr. Maciej Koszutski and the Ukrainian refugees.

It has been a while since I have gone to Mass or recited the Divine Mercy in Polish so that was a little bit of a challenge. Otherwise, the Pilgrimage was collegial and very spiritual. Like every Association we took a photo in the underground Basilica of St. Pius X. 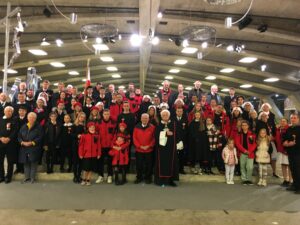 Like the Western Association, we met for prayers before breakfast and went to Mass in the morning. In the afternoon we would go to the grotto or walk the Living Stations of the Cross. Everywhere we went we had both the Polish and the Ukrainian flags with us. One morning as we passed the French Association, we got a standing ovation in honor of what Poland has done for the Ukrainian refugees. 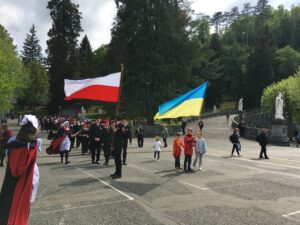 Polish and Ukrainian Flags in Procession Together

At the end of our Lourdes pilgrimage, we returned to Poland by bus, and I went to work near the border in Lubycza Krolewska at the Order of Malta Refugee Processing Center on the main road from L’viv to Warsaw the capital of Poland. According to the United Nations, as of May 20, 2022, Poland has taken almost 3,500,000 refugees.

There are no refugee camps in Poland as all the refugees are housed in private homes by families who have volunteered to help.

These 3,500,000 refugees are equal to 10% of Poland’s population. For comparative purposes, just imagine what this would be like if the United States took in thirty-five million refugees (10% of the US population) in a period of two months.

Most of the aid organizations are working at the largest entry points at Medyka and Przemysl. That is where Dr. Ed Gamboa, KM from Monterey, California, has been working. Ed and I communicated regularly as I was helping him make contacts with physicians in L’viv where I had previously worked for the Regional Children’s Hospital prior to the Russian invasion of Crimea in 2014.  My project to update their emergency medical and trauma services plan, though completed, was never implemented as all possible funds were reallocated to the military defense. 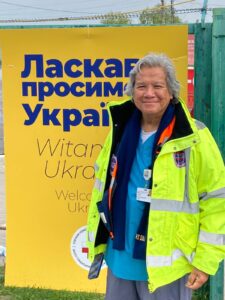 The Order was asked to work at the Lubycza Krolewska processing point because all the major NGO’s resources had gone to Medyka and Przemysl where 90% of the refugees arrive.  Lubycza Krolewska did not have enough resources; hence the Polish Association was asked to help staff the processing center. During the four days I worked there we had four Malta volunteers including Roland de Rosiere, KM, the Order’s Ambassador to Guyana. Ten days prior to my arrival the processing point was visited by another member of the Order of Malta from the United States, His Excellency Cardinal Timothy Dolan.

When a bus of refugees arrived at our location, I had the privilege of handing each child a toy and welcoming them and their mothers to Poland. During my service at the border, we would accept three buses a day or approximately one hundred refugees. After I left, Roland hired a bus and drove into L’viv to pick up a busload of refugees. It was a true honor to collaborate with him and the Polish Association volunteers. Two of the Polish Association’s volunteers Maciej Koszarski and Rafal Kander had been working almost daily since February 24th when the Russians invaded. The Center also had Polish government staff and World Food Kitchen (WFK) staff who served hot food.

I could comprehend this processing point handling one thousand refugees a day with extreme difficulty. The reality was that in March and early April when the temperature was below freezing, refugees often waited 24 to 36 hours on the Ukrainian side of the border prior to being permitted to leave due to the high refugee volume. Our processing point served up to three thousand refugees a day. It is unfathomable for me to imagine how they have been able to take care of so many refugees many of whom had frostbite, were dehydrated, and had not eaten or slept for days. The Malta volunteers at the border truly worked incessantly and in extraordinary conditions to help accomplish this effort. 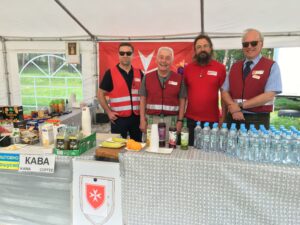 Polish Association Members and Volunteers Along the Ukrainian Border

Many of the refugees would spend the night in the processing center and then were transported by bus to Krakow or Warsaw where the Order had staff who would help them find housing or arrange for transportation to other western European countries. While at the center the children received toys, crayons, and drawing paper to keep them occupied.  One wall has hundreds of these drawings.  The one that touched me the most is shown below. 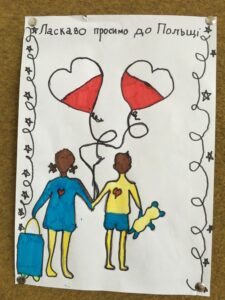 Drawing made my Ukrainian child.

The Polish Association also has reception points at the major train and bus stations throughout Poland to help the refugees on their journeys to friends and families in other cities or countries. Thousands of hours of volunteer time have been donated to help with the refugee crisis. As you can surmise, Poland remembers know what it was like to be invaded by the Russians, seeing as how the country of Poland experienced the Russians invading three times in the 20th century, 1920, 1939 and again in 1944.

Thus, the Polish people truly empathize with their Ukrainian neighbors.

Should the invasion expand westward, there will be a need for more physician, nursing, and other healthcare volunteers to treat those injured. If hundreds of thousands of wounded appear on the Polish border, the Polish healthcare system could be overwhelmed. Hopefully, that will not happen but if it does, I hope other members of the Western Association will be able to join Dr. Ed Gamboa and myself if needed.

When faced with such aggression we can overcome the feeling of helplessness by praying and serving. This experience was so fulfilling. I invite other members of the Order to connect with their roots at the annual international party during our Lourdes Pilgrimage.  At minimum you never know what service opportunities may arise and you will make many new friends like I have had the opportunity to make.

Celebrating St. John the Baptist at St. Bernadette's in Phoenix