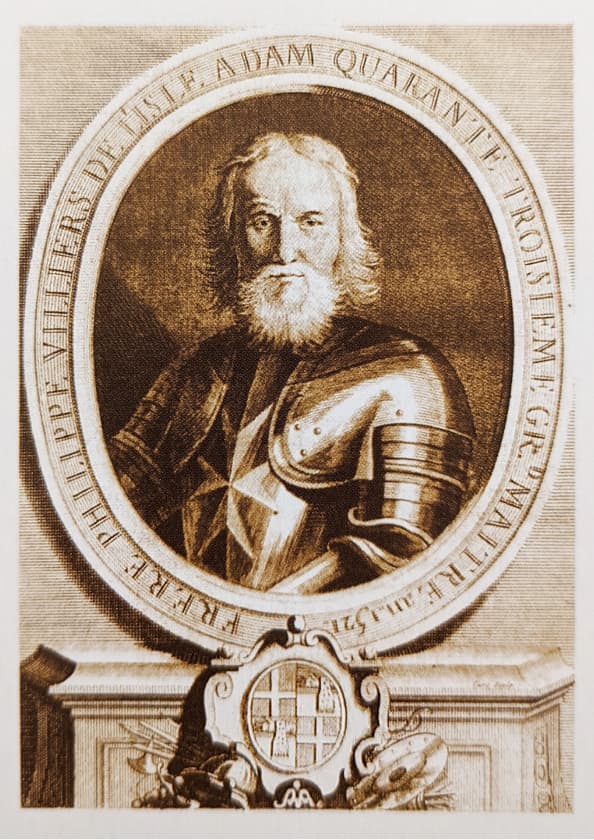 Philippe Villiers de l’Isle Adam was born to a noble family in 1464 in Beauvais, France.

He joined the Order of Malta (still referred to then as the Order of St. John) when he was still young, probably arriving in Rhodes before the siege of 1480. He quickly distinguished himself as a capable military commander, sailor and diplomat.

Before becoming Grand Master, he held a number of other leadership positions in the Order, including Captain General of the Galleys, Seneschal of Rhodes and Head of the Langue of France.

He was elected Grand Master of the Order on January 22, 1521. In the same year, Suleiman II, the Turkish sultan, threatened invasion. Despite the new Grand Master’s attempts to fortify Rhodes’ defenses, Suleiman’s forces succeeded in taking the island.

Following this devastating loss, l’Isle Adam and the Knights of the Order left Rhodes with full honors of war in search of a new headquarters. This search lasted eight years, during which

l’Isle Adam never gave up hope of returning to Rhodes.

Finally, in 1530, Holy Roman Emperor Charles V granted the Order the Maltese islands. The concession of Malta did not please everyone within the Order, particularly its knights from France. But, a practiced diplomat, l’Isle Adam succeeded in winning over the disgruntled French knights. The Order sailed into the harbor of Malta on October 26, 1530.

While l’Isle Adam’s magistry witnessed a number of naval expeditions and the historic move of the Order to Malta, it also witnessed King Henry VIII’s break with the Catholic Church in January 1534 and the merciless persecution of Catholics in England that followed. The Order’s surviving English knights fled to Malta seeking asylum.

By this point, l’Isle Adam was an old man whose health was increasingly weak. Just months later, in August 1534, he died of a violent fever. He was buried in Fort St. Angelo, while his heart was placed in the Convent of St. Mary of Jesus in Valletta. His remains were later brought to St. John’s Co-Cathedral, which the Order built in Valletta between 1572 and 1577.