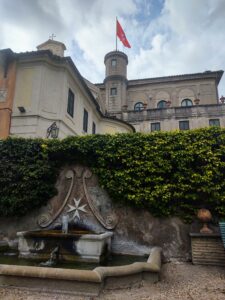 Magistral Villa of the Order of Malta in Rome

The universal Communications Summit of the Order of Malta in Rome was reconvened after a few years of Covid recess to announce wonderful changes to how the Order relates messaging to the members and public with world-class software and websites.

The weekend of meetings and workshops was highlighted with the appearance of H.E. Riccardo Paternò di Montecupo, Grand Chancellor of the Order of Malta.

His publicized quote to the communicators was:

"As a charitable institution, we are called to act quickly to help those most in need. Without your constant work, our mission would not achieve the desired results.”

His message to the communicators suggested a behemoth goal:

“I want to be the biggest Catholic Lay Religious Order in the World and I want to be in the Press every day!” 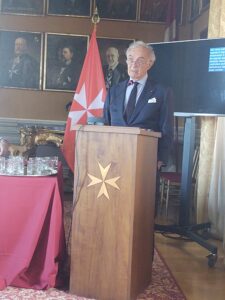 Of course, his point was that, in addition to achieving more cohesiveness, His Excellency would like to see the Sovereign Order of Malta get more well known worldwide.

It was here that the room was open to questions and comments, and Brian G. Bouterie, PROV2022, Assistant Communications Delegate of the Western Association, was boldly able to address His Excellency and the forum.

Mr. Bouterie thanked His Excellency for his time with the communicators, and that we were honored that he visited with us.

He shared that he was still new to The Order as a Provisional Member, and that he had seen changes abundant in the short time that he had been involved.  He recalled his own experience that he had to learn about the Order of Malta because it didn’t appear to him to be as well-known in the United States as it is in Europe.

“I would like to see the Order of Malta have the recognition in my country, the United States of America, like it does in Europe; especially Italy.”

He relayed that in just a few days of touring Rome, wearing some of his Order of Malta attire was hugely identifiable to the public at large.  Mr. Bouterie shared that passers-by often acknowledged the white cross logo, and that it was a springboard to further conversation as he trekked about the sites of Rome. 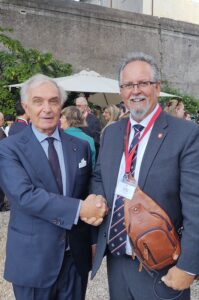 Mr. Bouterie stated that it would be the goal of all of the Associations to help the Order of Malta become as recognizable and universally respected as his own experience in Rome.

H.E. Riccardo Paternò di Montecupo, Grand Chancellor thanked Mr. Bouterie for his remarks, and then sought him out at the break to express gratitude personally.  They spoke privately for several minutes, and were photographed together.

Eugenio Ajroldi di Robbiate, KM arranged for a number of workshops that included ways to communicate most effectively, how to use and edit Wikipedia, and a few back-to-basics classes on how to take photos and videos on one’s cell phone. 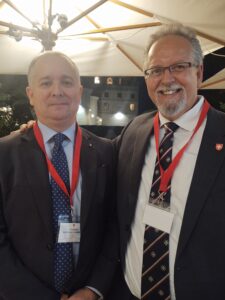 A major emphasis was placed on the introduction to the new and improved web site that uses special software and should make our internet presence appear seamless, regardless of the country of origin and size of our worldwide Order.  The communications team of the Grand Magistry feels confident that the debut shall occur very soon! 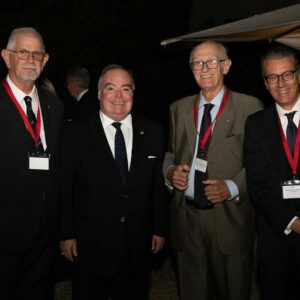 Members of the Sovereign Council

Interestingly, there was a gathering of the Sovereign Council at the same time and some came to the Magistral Villa for cocktails and a meet n’ greet with H.E. Fra' John Timothy Dunlap, Lieutenant of the Grand Master.  His Excellency didn’t stay for dinner. It was a quick visit.

H.E. Michael Grace of the Sovereign Council, and former president of the Western Association, however, did in fact stay to dine with the communicators. 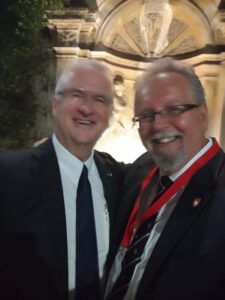 The Order’s communicators around the world were given much to bring back to his and her own Associations, and a mission to advance the notion that the the Order of Malta is here to stay, and nothing will prevent our most basic function from thriving; to care for the poor and the sick and to witness the Catholic faith – Obesquium Paperum et Tuitio Fidei.